I began riding adventure bikes in 2015 when I purchased a used 2014 BMW F800GS. Most of my riding up to then was spent on smaller dual sport

bikes exploring the wooded areas of the Upper Midwest. And before that I focused on motocross on several tracks dotted across northern Illinois.

What attracted me to adventure riding was the concept of taking what is essentially a big dirt bike and stretching the limits of the machine’s abilities. Whether gravel roads, two track, single track or winding back roads I became more and more amazed at what can be done on what some describe as the Swiss Army Knife of motorcycles. The only limits are your abilities and your imagination.

Enter the Backcountry Discovery Route® (BDR®) concept. For those not familiar with the BDR®, it is a network of mostly off-road routes stretching from border to border in several western states and along the Eastern Seaboard. Generally, each route goes north to south within a state, when riding out west, or across several states as is the case with development recently of the Mid Atlantic BDR® which travels from southern Virginia to the Pennsylvania-New York border.

Each BDR® is designed to give the rider a taste of what each area has to offer and do it by taking them along some of the most remote and beautiful areas possible. While any bike can handle a BDR®, the bigger adventure bikes shine due to their range, ability to carry supplies for an extended trip off road and their being comfortable navigating most types of terrain.

In 2018 I was fortunate enough to experience the high mountain passes across western Colorado on the Colorado BDR®, as well as the history and remote forests found on the Mid Atlantic BDR®. For 2019 I wanted something new and different. I found it in Arizona.

I was able to convince three close friends to go along. We had ridden together for the first time on the MABDR® and we just clicked. You know how sometimes you ride with a group and you all just seem to be an extension of each other. Like you have been riding together for years. This was what it was like riding with Jeff (BMW F800GSA), Chris (also on an 800), Eli (Husky 701). I was riding a KTM 1090 Adventure R. We had met at various rides around the country and came together for the MA and I had hoped they would be as excited as I was to do AZ. They were.

The overriding challenge of any BDR® is the logistics. We all live in the eastern part of the country and we had to figure out how to get the bikes, gear and ourselves out to Tempe. We chose Tempe because it was roughly at the center point of the route and it was easy to fly into the area. The central location allowed us to have a reasonable short ride south to the beginning of the BDR® and a similar trip from the end back to where we left the truck and trailer.

If you go to the BDR® website (ridebdr.com) you will find that each route has an estimate of difficulty…with one caveat. The weather. The routes can change drastically, along with the challenge, depending on whether it had recently rained…or snowed. Excessive heat can also make the trip unbearable as dehydration and muscle cramping can stop the trip abruptly. The AZBDR® offers both extremes of heat and freezing temps.

The official beginning of the BDR® begins south of Sierra Vista at the Coronado Memorial, named after the explorer, Francisco Vasquez de Coronado who discovered many southwestern landmarks including the Grand Canyon. The memorial park sits up high above the San Pedro River and looks out into Mexico. The BDR® route descends into the river valley and travels west for a mile along the southern border fence. After stopping to take the requisite photo feigning escape across the barrier, we finally pointed the bikes north. We stopped for fuel in the small town of Sonoita where we also got a bit of border education from one of the town residents and former border minuteman.

We got our first taste of AZBDR® rocks and sand as we traversed the historic Empire Ranch. A modification of the route in 2018 bypassed the infamous 3 miles of deep sand but added long stretches of rock-strewn trail. At this point we had not realized that rocks would be our constant companion through most of the AZBDR®. The route finishes up on pavement into the town of Benson.

A very long stretch of pavement and wide gravel roads greeted us at the start of Day 2 but we were rewarded with some outstanding Mexican food at Las Michoacanas in Mammoth. Then back to gravel roads then rocks as we crisscrossed the railroad tracks west of Highway 77.  Our first mishap occurred here as Eli went down on a steep rocky incline causing damage to the skid plate. After about an hour of pounding at the gas stop in Winkelman, we managed to get everything back in place. Turned out the effort was well worth it as we elected to take the alternate expert section into Globe. The section featured some steep rocky switchbacks as we wound our way up Pioneer Pass in the Tonto National Forest for our first real taste of elevation. We were rewarded with some amazing views. Arizona is certainly not all dessert. Day 3 took us from Globe to Young. This was the section I was most concerned about as it is known to feature some challenging rock sections. We decided to get an early start and keep breaks to a minimum in order to avoid getting in too late. This was also the section that had me suggest to the rest of the team that we bring camping gear along, even though we elected to motel camp for the trip. The thought of getting stranded in the Arizona dessert over night without shelter was not an enticing. As it turned out, I was over thinking things. We did encounter rocky sections but nothing impassable at all and we rolled into Young at 12:30 in the afternoon. Much to the chagrin of our host at the Pleasant Valley Inn who was expecting us much later. In hindsight, we could have made a stop at the cliff dwellings at Tonto National Monument near Roosevelt Lake. The BDR® routes are designed to not only give you some great riding experiences but also to expose you to what the region has to offer in terms of history, geology and culture. Sometimes it gets all too easy to get so caught up in the ride that you forget to stop and smell the roses.

The real challenge was in store for us on Day 4 as we left Young and headed to the Mogollon Rim in the Coconino National Forest. The rim is a 2,000-foot-high escarpment and is part of the Colorado Plateau. We managed to explore some of the views from the rim at the entrance to Coconino NF but word of the rim road being closed further up the trail by 2 feet of snow caused us to look for a go around. The only option was a 60 mile stretch of pavement along routes 240 and 87. What complicated this was steadily falling temps as we climbed up towards gas at Clint’s Well. By the time we got to this point, which was a few miles off the main BDR® route, snow and hail had begun to fall. Warmth and hot coffee at the station was very welcome as was advice from the attendant about the trail being closed up ahead. He gave us a great alternate route to get back on the BDR® which had been impassable due to flooding just a couple days earlier. Seeing our hotel in Flagstaff was a welcome sight as was the hot shower and meal. We were ready for Day 5. Day 5 brought us to the edge of the southern rim of the Grand Canyon. It was well worth the trip as we peered down 7,400 feet at Grandview Point to the Colorado River below. It is truly awe inspiring. One of the guys had a hard get off when he got cross rutted and was a bit foggy mentally for the remainder of the day. As a result, we elected to ride the pavement rather than take the remaining portion of the BDR® and called it a day in the town of Cameron. We spent the night at the Cameron Trading Post Lodge. Very touristy but the lodging and food were first rate and reasonable.

The final day featured a long trek through the Navajo Reservation. Be sure to pick up your permit before entering the reservation. This was by far the most remote portion of the BDR®. We saw no one the entire time except for a couple bands of wild horses and the ubiquitous cattle that seemed to be everywhere on this trip. The openly grazing animals are managed by numerous gates and cattle guards. Most of the guards are flush with the ground and are easy to pass over. I did manage, however, to find one that was not so even and my inattention was rewarded with a bent front rim. It would lead to a flat the next day when the bead finally dislodged from the rim but luckily it held together while in no man’s land.

A side trip while on the reservation to the Little Colorado River overlook was incredible. We were alone with this deep gorge which eventually feeds into the main river and through the Grand Canyon. While the Little Colorado Canyon is nowhere near as deep as it big brother, it almost made it more impressive as it was easier to take it in and appreciate nature at work.

The rest of the day proved uneventful as we travelled through Marble Canyon, the Vermillion Cliffs and arrived at the Utah Border about midday. We made a last minute decision to stay in Page on the last night based on Chris’ excellent Yelp research. Did not disappoint in that we experienced great hospitality at the Lake Powell Motel along with amazing BBQ and music at Big John’s Texas BBQ. We made our way back to Tempe the next day by going through Oak Creek Canyon, the town of Sedona and the twisties along Route 89A. Don’t miss the town of Jerome for its views, food and throwback 60s lifestyle.

The Arizona BDR® did not disappoint. The state’s diverse beauty and climate is on full display from the desert dominated southern end and the transition to majestic mountains and forests to the north. After managing the AZBDR® this year, the next question is which BDR® to tackle in 2020. Maybe the new one that stretches up through New England? Can’t wait.

If you have questions about the ride feel free to contact me at motoridetours@gmail.com 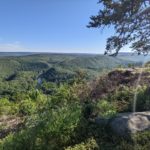