From Interstate to Single Track: Testing the Extremes of Adventure Motorcycles in the Bald Eagle State Forest

The popular dual sport YouTube channel, EveRide ADV, asked the question recently, “What makes an Adventure?” Many of the answers included exotic trips such as through South America or riding the Dalton Highway in Alaska. There was also discussion centered around what type of bike you had to have in order for the trip to be called an adventure. The myth of needing a large displacement machine was busted recently by an article I read about someone riding a Vespa across Africa. But in the end, the consensus was that what really constitutes an Adventure is when you step a bit out of your own personal comfort zone to acquire skills not yet developed. To push the proverbial envelope by engaging in an activity previously not explored.

It was with this in mind that a group of friends made our way to Bald Eagle State Forest in central Pennsylvania, just east of State College, Pa and home to Penn State University. Bald Eagle is well known to riders in the Eastern part of the United States and a section of the Mid Atlantic Backcountry Discovery Route (MABDR)® goes through the forest. It is characterized by a maze of gravel roads connecting a large network of trails from tight single track to Drivable Trails (essentially non-maintained jeep trails). On most weekends during the season you can see many small displacement dual sport bikes tackling the rock-strewn paths of Bald Eagle.

But most of our group had different ideas. While two riders in the group (Jon and Jeff from Allentown, Pa and Traverse City, MI respectively) tackled Bald Eagle on small bikes (Husky TE 250 and a DRZ 400) the remaining members had opted to take on the varied terrain with the beasts of the moto world. Chris made his way from Bethesda, Md on his BMW F800GS by riding the southern Pa portions of the MABDR®. Eli from Scarsdale, NY (KTM 790 Adventure R) and Marcus from Brooklyn (KTM 1190 Adventure R) arrived carrying their bikes in Sprinter type vans. While I left the Chicago suburbs on my KTM 1090 Adventure R racking up miles along Interstate 80 through Indiana, Ohio and Pa. While exploring back roads would have been ideal, time crunch forced me to do some high-speed slab miles to arrive in time. We had all taken on varied terrain before on the bigger bikes, but this mostly included the wider routes typically seen on adventure rides. Gravel roads, some rockier two track and varying levels of sand, water and mud. But none of us really had experienced enduro-type single track where a smaller displacement dual sport bike would be better suited. But we were determined to see just how far we could push the bigger machines.

Adventure bikes have been described as the Swiss Army Knives of the motorcycling world, and my experience with my 1090 has born this out. While it is true that often people buy ADV bikes and restrict their use to the pavement only, others take advantage of their off-road capabilities and ride them more like big dual sport bikes. KTM’s Quinn Cody actually rode a 1090 in the Iron Class of the 2017 Romaniacs Extreme Enduro. And it was a YouTube video of a guy riding his 1090 on some tight single track that sealed the deal for me when deciding which bike to buy. Not that I am anything near a Quinn Cody, but I figured that if the bike could handle the Romaniacs then it certainly could take anything I could throw at it. 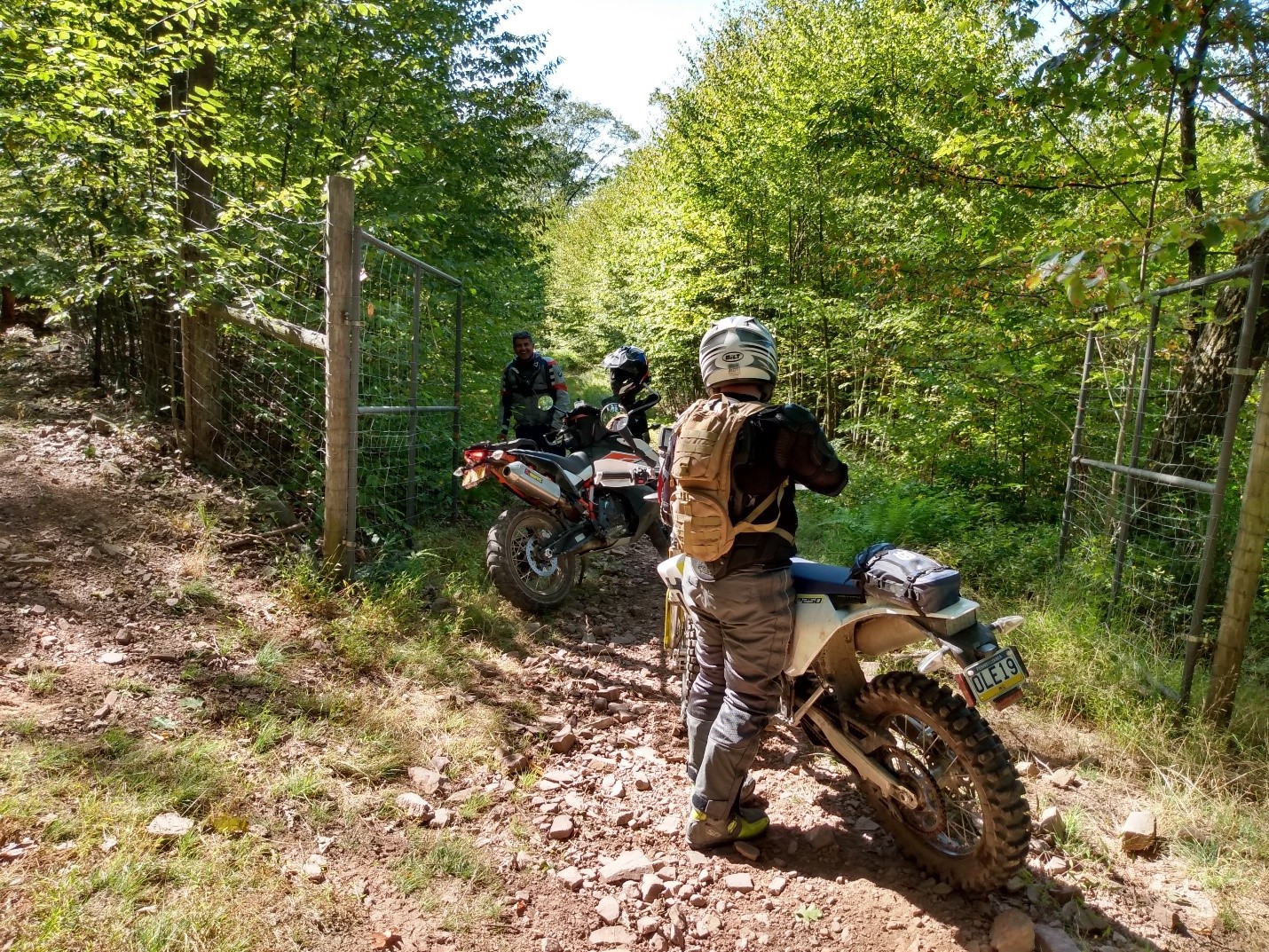 After camping Thursday night in the forest, we began the weekend on Friday with Jon (who had ridden Bald Eagle many times) leading Eli and I through some open roads and more technical trails. Paths with names such as Decker, Tower, Bull Hollow, County Line, Cold Springs and Sand Mountain got our attention. I was thankful that I elected to mount a new set of MotoZ Rallz tires before leaving Chicago since the extra traction made the difference between getting through a section and just spinning in place. The trails featured mixtures of loose gravel, scattered rock sections and progressed to the larger “baby head” variety of stone. Judicious clutch use and constant changes in body position were essential to managing these trails. Elevation changes in both directions were the norm as we struggled to maintain momentum. We finished up Friday’s ride and headed back to our weekend rental home near Spring Mills, Pa and met up with the rest of our group. Saturday and Sunday featured more of the same terrain as we brought Jeff, Chris and Marcus along for the ride. One of the joys of the weekend was watching riders on small displacement bikes looking at us in amazement as we crossed paths with them wondering what was wrong with us that we would want to ride these monsters when it would be much easier to be on a 500cc bike or smaller. Jeff on the DRZ posed the same question to me earlier and my response to him was something like “ANYONE can ride this stuff on a small bike. The big bikes offer more of a challenge”. And that was what this ride was mostly about. Yes, we COULD have done this on smaller bikes (I have a KTM EXC 350F at home as well) but then we would never have known just how far we could push the big bikes and how far we could push ourselves. We learned that we did not have to shy away from a small rock garden. Just stand up, pick a path and maintain momentum. I had been through a training class with Pine Barrens Adventures where we learned to get over logs by using a kicker log. I struggled with the technique in class. But, on this trip, we encountered that exact situation on a trail called Cold Springs. And this time I didn’t hesitate. Popped right over that sucker as did the rest of the group. Don’t get me wrong, there were trails that Jon described to us that we knew we had no business going on with our ADV bikes…and we avoided them. The goal was to push A LITTLE beyond our comfort zone, not try to blast through it.

That, I think, is the real message. We don’t suddenly become great riders overnight. We become better riders one ride at a time. Not by riding over our heads and getting into trouble, but by trying that skill that we had not tried before. Seeing what it is like to hit a deeper stretch of sand, what about exploring a water crossing (after first checking it out ahead of time…trust me), or tackling a hill that is a bit steeper or longer than you had in the past. Or maybe it is traveling 700 miles on the interstate, bouncing up and down rocky single track for the weekend then doing the tollbooth route again, finally arriving safely back home. Ain’t Adventure grand?!!